Encourages law students to submit analytical writings on what the rule of law is, or should be, the interpretation or implementation of existing or suggested legislation or case law and whether or not it furthered the equal and fair regulation of civil and human rights. 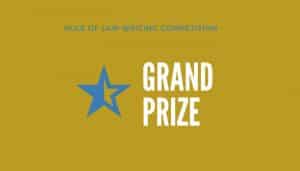 The Problem with Johnson and Lemond: Irreconcilable Science and the Brady-Napue No-Man’s Land 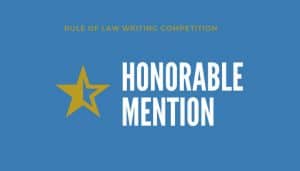 Guilty Beyond a Reasonable Vote: Challenging Felony Disenfranchisement Under Section 2 of the Voting Rights Act

About the Rule of Law Writing Competition

The Rule of Law is not well defined. It needs to be. The lack of a definition lends to its use as an epithet for whatever the speaker wants it to mean. It also inhibits the study of the rule of Law, its aspects and its effects. Study will test and refine the rule. Study will allow predictions of its effects to be tested. Assuming its benefits can be predicted and verified the Rule of Law will be validated as the fundamental value which sets one nation above another in its recognition of both human rights and economic success.

A fair justice system founded in tolerance and integrity guarantees the rights of individuals against the government, the powerful, and the many. The Rule of Law provides that tolerance and integrity. It gives respect to both personal rights and property rights. Because these rights are the primary incentive for achievement, they bring to the nations that follow the Rule of Law economic and political success as well.

The Rule of Law is a process consisting of five essential elements:

Some challenge the Rule of Law as peculiar to the Western world or not suitable to all cultures. Some see the current success of the nations which follow the Rule of Law as chance, good fortune or a mere shifting in the vagaries of history. If the process (the Rule of Law) has inherent value, it should be possible to show a direct relationship between the integrity with which a nation enforces the Rule of Law and the success, economic and otherwise, of that nation. For example, one might predict a correlation between the number of attorneys in a country and that country”s economic standing. The extent of the independence of the judiciary or of individual rights could also be tested to see whether they correlate to economic success.